Funniest 'Guardians Of The Galaxy' Characters

The Guardians of the Galaxy franchise has given audiences some of the most action-packed, emotional, and hilarious moments in all of the MCU. With some of the funniest characters (both intentional and accidental), all of us have fallen in love with this ragtag group of lovable characters over the past six years. But who's actually the funniest of the bunch? Let's break it down...

Here are the funniest Guardians of the Galaxy characters, ranked. 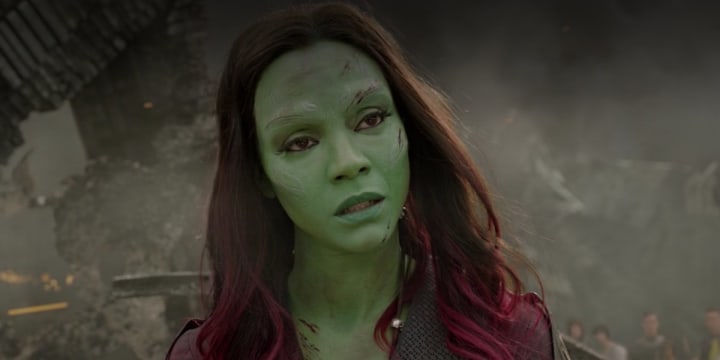 Funniest Quote: "I know who you are, Peter Quill! And I am not some starry-eyed waif here to succumb to your… your pelvic sorcery!"

Gamora, the adopted daughter of Thanos, isn't really known for her humor or comedy chops, but this lethal assassin has had her fair share of funny moments throughout her MCU appearances. Unlike most of the funniest members of her team, however, Gamora's funniest lines are made even better because of how unaware she is.

Take the quote listed above from Guardians of the Galaxy as a good example of Gamora's hilarious, yet unintentional style of humor. She doesn't know "pelvic sorcery" is a hilarious way to describe Peter Quill's attempt to swoon her, which makes the whole confrontation that much greater. Sometimes sincerity and tragedy leads to great comedy. 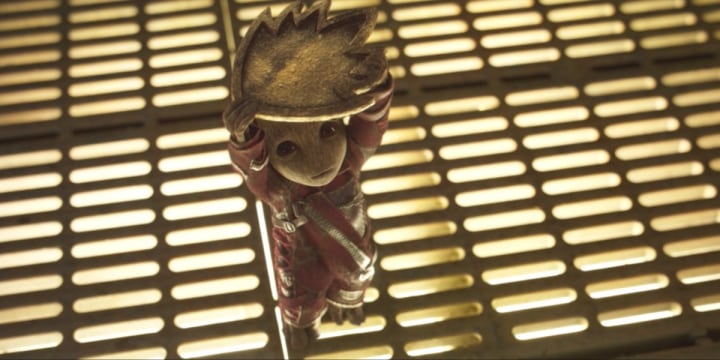 Funniest Quote: "I am Groot!"

For a character that says three words (five if you count "We" and "are"), Groot is one of the funniest characters in the MCU, and that's saying a lot. Over the course of his multiple appearances, Groot goes from a giant walking tree to a cute dancing tree and then finally a snotty-nosed teenage walking tree, with a different personality for each version of himself.

Over the course of his appearances in the franchise, Groot has given us funny moments like the dance number to open Guardians of the Galaxy Vol. 2, the part where he brings Rocket and Yondu a severed human toe later in the movie, and the wisecracks he throws back at Quill and Rocket in Avengers: Infinity War. It's mostly physical comedy with this lovable tree, and that's alight because it appeals to anyone and everyone no matter the language. 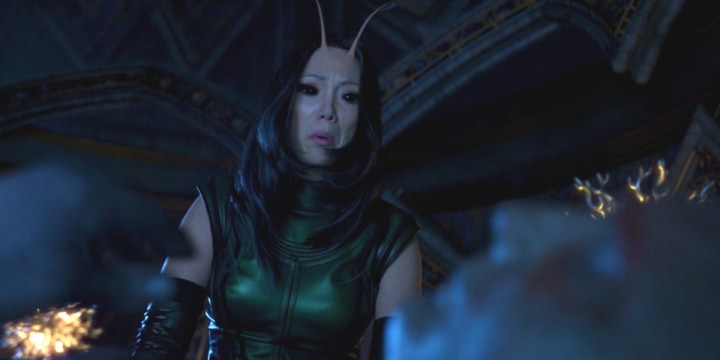 Though Mantis wasn't introduced until Guardians of the Galaxy Vol. 2, she has been part of some of the funniest moments in the franchise, and all of the MCU for that matter. The character first showed up as Ego's personal assistant (better way of saying slave), but quickly became a part of the team once she informed the Guardians what the god had in store for Peter Quill and the rest of the galaxy.

What makes Mantis such a great comedic figure is the fact that she is so innocent and hasn't been tainted by cynicism or self-awareness. During the fight with Thanos on Titan in Avengers: Infinity War, Mantis has a brief interaction with Spider-Man where she mixes up the classic "Kick ass, take names" cliche and accidentally reverses it. Unintentional comedy gold. 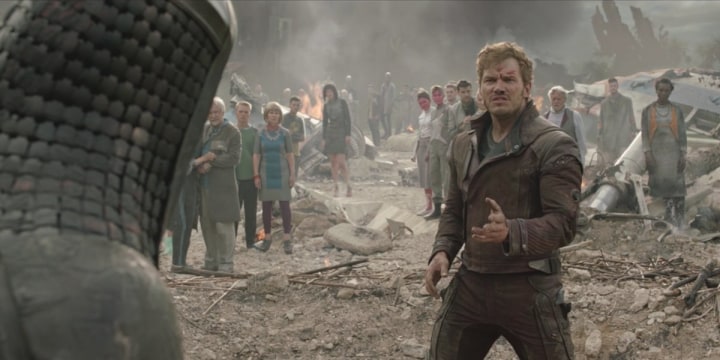 While he can be annoying (like extremely annoying) at times, Peter Quill, aka Star-Lord, has his fair share of funny moments throughout his multiple appearances in the Guardians films as well as the MCU as a whole. The son of human mother and a celestial being as a father, Star-Lord could have grown up to be a power-hungry god like his father, but thanks to his mother, and his "daddy" Yondu, the leader of the Guardians of the Galaxy turned out okay, all things considered.

From the first time Quill is introduced, he is shown to be a comedic figure. The way he danced, skipped, and carelessly made his way around a desolate planet is perhaps one of the best introductions in the MCU. The way he calls himself "Star-Lord" in his first confrontation, the dancing scene at the end of the first movie, and his exposed vulnerability in Avengers: Infinity War all come to mind. And let's not forget his attempt to speak like Thor in Avengers: Infinity War. Classic. 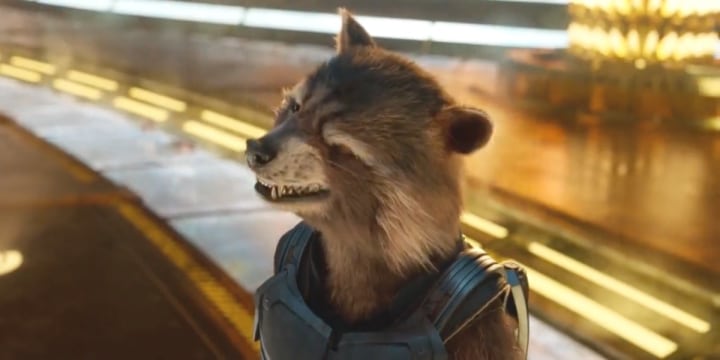 Funniest Quote: "Ya' know, they told me you people were conceded douchebags, but that isn't true at all."

The wisecracking, condescending, and sarcastic Rocket Raccoon will forever go down as one of the most engaging members of the Guardians of the Galaxy, though he has also proved to have a soft spot from time to time. All sorrow and seriousness aside, Rocket is also one of the funniest members of the crew, and that's not just because he is an anthropomorphic raccoon that shoots a gun and steals legs and eyeballs.

Ever since audiences were first introduced to Rocket, this smart-ass character has more than entertained in scenes that have shown him make Quill think he needed another prisoner's fake leg, the "wink wink" scene after stealing some anulax batteries from the Sovereign, and all of his hilarious interactions with the different forms of Groot. This "sweet rabbit" has quite the chops. 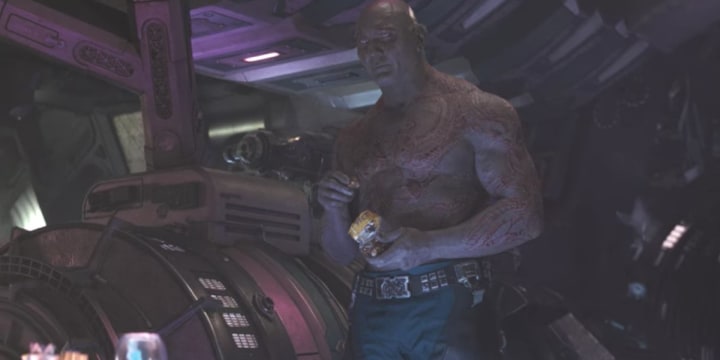 Funniest Quote: "I've mastered the ability of standing so incredibly still… that I become invisible to the eye… Watch."

Without a shadow of doubt, Drax is the funniest member of the Guardians of the Galaxy. While Star-Lord might seem like the funniest character in the franchise thanks to his charm and overtly comedic moments, and although Rocket has some of the best one-liners, Drax is so dense and literal that you just can't help but fall over laughing whenever he speaks. This tragic character wants nothing more than to destroy the man who killed his family, Thanos, but when he's not hunting the Mad Titan, Drax the Destroyer kills our sides with laughter.

Brutally honest as he his dangerous, Drax spends both Guardians of the Galaxy movies and his appearances in the crossover Avengers movies kicking ass and making everyone laugh around every corner. The character is so funny that it showed the world a different side of the Dave Bautista, the wrestler turned actor who brought the character to life on the silver screen. I mean, whatever character can stand so incredibly still he makes himself invisible?

Those are the funniest members of the Guardians of the Galaxy. Now would be the perfect time to sit back, relax, and rewatch the Guardians in all of their insane and hilarious misadventures.