Why Alison Brie Would Be A Great She-Hulk

It’s frequently exciting when a new Marvel project reaches the casting stage. Fans who care about said topics are curious who will be the first on-screen Moon Knight, who might Marvel and Sony cast as the next Spider-Man villain, and which young actor could land the coveted role of Kamala Khan, better known as Ms. Marvel.

One such Marvel television show is inching closer to production, and that’s She-Hulk for Disney+. The show was announced by Marvel Studios guru Kevin Feige, though beyond that, details have been hard to come by. We know that Rick and Morty writer Jessica Gao is heading up the show’s writing team. We don’t know the show’s drop date, but a new rumor suggests that casting wheels are turning, and they are looking for an Alison Brie-type to play Jennifer Walters, aka She-Hulk.

That’s a terrific way to approach She-Hulk. And I have the perfect suggestion for someone who fits that “Alison Brie” type the studio might be looking for to fill the role.

There are two reasons why I think Brie would be an ideal fit for Jennifer Walters. If you don’t know the lore of She-Hulk, she’s Bruce Banner’s cousin, and received the mythical Hulk “curse” when she needed a blood transfusion following an accident. Jennifer’s Hulk tendencies can best bet described as Hulk Lite. Meaning, she maintains her personality and intelligence (she’s a lawyer) but also flares up into full-green Hulk mode when angry.

Knowing that She-Hulk needs to maintain a personality and intelligence, getting Alison Brie to hold down those aspects of the role would be both intelligent and fortuitous. She’s a gifted comedian who landed on people’s radars by playing the anxious but alluring Annie Edison in the wickedly smart Community. At the same time, Brie was holding down dramatic parts in equally successful shows like Mad Men, and branching out into film with Sleeping with Other People and The Kings of Summer.

But Brie’s television experience make her well-suited for the She-Hulk schedule. Brie’s familiar with how a serialized story plays out. She’s versed in the episodic nature of the storytelling on a project like this. (So is Krysten Ritter, for what it’s worth, but Marvel would never cast the old Jessica Jones as the new She-Hulk… right?) And the personalities that she has portrayed in previous roles would be snug when applied to She-Hulk. Alison Brie is a big enough star to get you interested in She-Hulk, but not big enough that she’d overshadow the role.

Look at her looking all scholarly and lawyerly on Community! 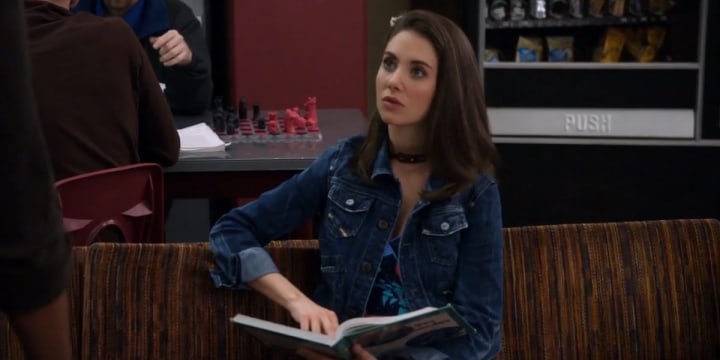 “But she’s tiny!” you’ll complain, and you are right. At 5’ 3” Alison Brie is as small-framed as most actresses. But have you seen how physical she can be in Netflix’s wrestling series, Glow?

I find it funny that the rumor is that She-Hulk is looking for an Alison Brie type, when they can just get Alison Brie. And I’m not alone.

This makes too much sense not to happen. Get it done, Marvel. Lock up Alison Brie, and ensure that She-Hulk gets off on a strong foot.

GreyJediForce
1y
I did look her up to be sure. She has my approval.